The Urban Development Corporation has made possible the construction of a major hospital by selling part of its land holdings on the Delta Triangle. Together with perspective.brussels, it plans to develop a mixed programme of amenities, businesses and housing for this gateway site to Brussels at the end of the E411.

The Delta Triangle is one of the three main spaces of the Delta-Souverain Strategic Area, which also includes the ULB-VUB university campus and the land around the Hermann-Debroux viaduct. The Delta Triangle is a site of more than 10 hectares which was occupied until 2012 by the SNCB-NMBS. The site is wedged into the triangle formed by Boulevard du Triomphe to the north, railway line 26 to the east and railway line 161 to the west. It is also crossed from west to east by rail link 26/2, to form two areas known as Delta North (the site of the CHIREC project) and Delta South.

bpost issues call for proposals for the Delta Triangle 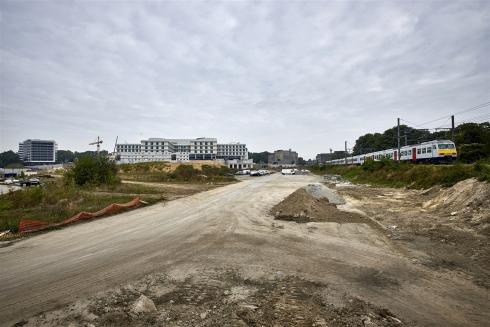