The Urban Development Corporation has purchased the Delta Triangle, a gateway to Brussels at the end of the E411, and plans to develop a mixed programme of facilities, business premises and housing there.

These three areas are central to regional concerns, and many developments are under consideration there in the short and medium term.

The ‘Delta Triangle’ is a site of more than 10 hectares which was occupied until 2012 by the SNCB-NMBS. The site is wedged into the triangle formed by Boulevard du Triomphe to the north, railway line 26 to the east and railway line 161 to the west. It is also crossed from west to east by rail link 26/2.

The role of the Urban Development Corporation

The SAU (at that time the SAF-MVV) acquired the Delta Triangle because of its strategic importance for the Brussels-Capital Region as one of the last significant land reserves in the region.

In line with the Brussels-Capital Region’s desire to see the development of a new hospital complex in the area, an agreement was signed in 2013 between the SAU and CHIREC for the sale to the latter of the northern part of the Delta site for the construction of its new hospital. The opening of the New CHIREC took place in Dcember 2017. A second phase in the development of the CHIREC complex, comprising a mixed programme of housing, shops and amenities, was started in 2018.

Meanwhile, several outline planning studies for the southern part of the Delta site have been performed. These studies focusing on the question of feasibility (urban integration, environment, transport, infrastructure etc.) have identified various approaches to the development of an urban programme. Initial work on Delta South's road network is scheduled for 2022.

The development of the Delta Triangle represents part of a wider range of initiatives by the Brussels-Capital Region in the Delta-Souverain strategic area, which will be the subject of a Development Master Plan. In late September 2016, perspective.brussels launched a call for project designers to develop this Master Plan. 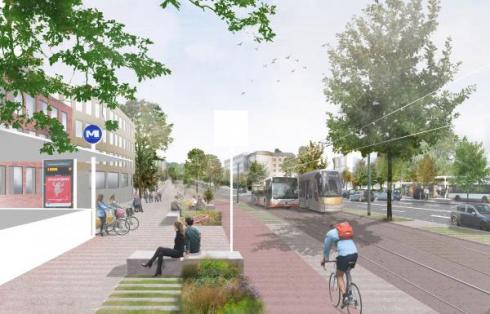