The Urban Development Corporation (SAU) has been tasked with studying the possibilities for converting the site currently used for the central fire station of the Firefighting and Emergency Medical Assistance Service (SIAMU-DBDMH) on Avenue de l’Héliport.

Located where the Canal Area meets the Manhattan district next to the Gare du Nord railway station, Héliport, which is currently Brussels’ central fire station, extends over an entire street block between Avenue de l’Héliport and Rue Frontispice. It occupies around 0.8 hectares of ground and has a built area of 26,500 m². The SIAMU-DBDMH site will be vacated in the medium term with the central fire station’s relocation to the Port Business Park (formerly TACT).

The SAU has also been tasked with delegated project management for the construction of these future SIAMU-DBDMH premises at Port Business Park.

The Urban Development Corporation has been asked to study the programmatic, spatial, economic and environmental possibilities of the Héliport fire station with a view to its future conversion. The objective is to oversee its transition within the framework of the Be Sustainable reference guide developed by Brussels Environment.

In December 2020, the SAU published a public procurement notice with a view to appointing a multidisciplinary team to perform a study of the site’s potential and the possible scenarios for its conversion. 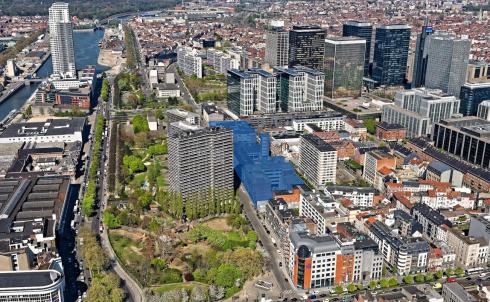