The Urban Planning Corporation (sau-msi.brussels) is the owner of this showcase for the Brussels Region, which is home in particular to the permanent exhibition experience.brussels. It will build a contemporary modular building here that will host ‘LE CHAT cartoon museum’.

Located at the corner of Rue Royale and Place Royale, between the Museum of Musical Instruments and the Royal Palace, the BIP Regional Centre is a showcase for the Brussels-Capital Region. Generally known as ‘BIP’ (short for ‘Brussels Info Place’), or sometimes as the ‘Complexe Royale’, the site belongs to the Urban Development Corporation (sau-msi.brussels).

BIP currently occupies three listed buildings. Erected in 1776 in connection with the creation of Place Royale, these constitute a superb example of a coherent ensemble in the neoclassical architectural style. They were re-opened in 2008 after extensive renovation carried out in several phases by the Brussels-Capital Region.

The three buildings, which tell several chapters of the story of Belgium and Brussels, are currently used for various facilities and purposes: the permanent exhibition ‘experience.brussels’ and a vast interactive model of Brussels, forming an ideal starting point for exploration of the city; the headquarters and central information point of visit.brussels, the regional tourism organisation; the weekly gatherings of the Brussels Regional Government; temporary exhibitions; one-off events; educational activities; and others.

The Hôtel de Grimbergen at 2-4 Rue Royale, which was originally built for Grimbergen Abbey, has been used for various purposes since the French Revolution. It was divided up and occupied by several businesses, including a café (the Café de l’Amitié, around 1830), a bookshop (around 1840) and a bank (Lloyd's, around 1920). The building was subsequently used by two governments: first the federal government (1984), and then the regional (1989). In the early 1990s, it was via its basement that the public was first able to see the archaeological remains of the Palais du Coudenberg, the former palace of the Dukes of Brabant and subsequently of Charles V, which lie under the current Place Royale. The Hôtel de Grimbergen is today the main entrance to the complex, providing access in particular to the offices of visit.brussels and the experience.brussels exhibition.

The Hôtel de Lalaing (or Hôtel de Spangen) at 11-12 Place Royale is located at the far end of a courtyard enclosed by imposing railings. It was the residence of William of Orange from 1821, before being sequestrated during the Belgian Revolution. The Belgian State used it as the headquarters for, successively, the Military High Court, the Ministry of Public Works, the Ministry of Railways and the Court of Audit. Legend has it that the Belgian Constitution was signed there by King Leopold I, in the Salle Léopold, the hall where the weekly gatherings of the Brussels Regional Government are held today.

The ‘Link Building’, visible on the right in the courtyard of 10-11 Place Royale, connects these two historic edifices.

The Brussels Regional Government has tasked the SAU with constructing a modular building on the BIP site to accommodate a new page in the culture of Belgium and Brussels: Philippe Geluck’s ‘LE CHAT cartoon museum’.

This new cultural institution will be accessible via the gate, flanked by two lions, of 6 Rue Royale, by which the Cour des Lions is entered to the rear and right of the BIP buildings, on a plot enclosed between them and Bozar.

More information about our activities on this site. 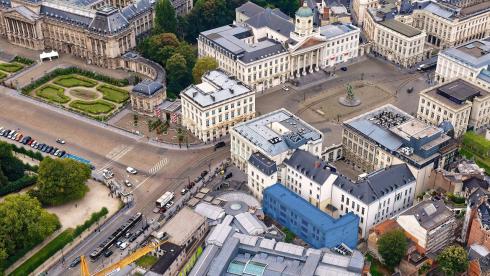 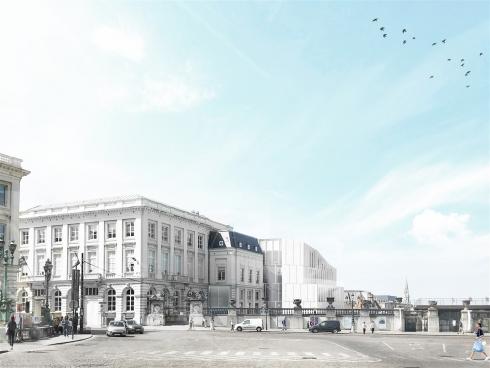 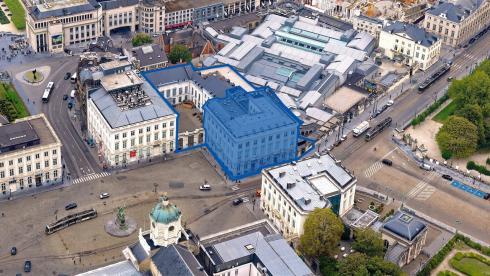